We recently discovered that both Ryann (oldest daughter) and I are gluten intolerant.  Which kinda sucks considering that gluten based products made up about 95% of our diet.  But, I was feeling really run down and tired, scatter brained and just completely not right.  I decided it was time to make some changes.  After reading an  article  about gluten intolerance I thought maybe the first change to take place should be to rid myself of gluten.   I decided to do a trial run and go two weeks gluten free, Ryann came along for moral support.  Within three days we both agreed that we could breath easier and our appetites had decreased.  By the end of the first week we had both lost a few pounds, our skin looked and felt better and we both just generally felt better - a lot better.  By the end of the second week we were both hooked.  Our digestion was better, our thinking was clearer - everything was better.  I won't lie, gluten free veganism isn't exactly easy.  It takes some effort, only because almost all premade vegan products are loaded with vital wheat gluten.  On long days of filling orders I can't just run to the grocery store and pick up some quick Amy's dairy free burritos, or vegan Boca burgers (which I did all to often.)  We're making  almost everything from scratch, but it helps  force us to premake meals so there's a lot less grabbing quick prepackaged foods; which is a very good thing.  Keep in mind that neither of us are severely allergic to gluten, there's no anaphylactic shock or anything drastic going on here.  There's just this mild yet constant discomfort, just enough to make life stink but not enough to let you know something's going wrong.  If you feel like somethings off, or maybe that you could use a dietary change I strongly recommend taking a break from gluten.  It may prove to be life changing.  It was for me. 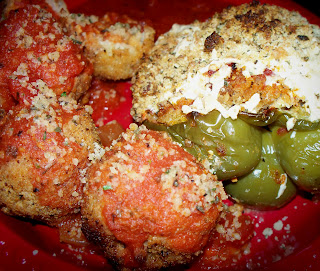 There are seven of us, the Mister and I plus five kids.  Only two of us have noticed a distinct positive change since going gluten free.  The rest are clinging to their seitan, and other gluteny foods for dear life.  I've been preparing two meals each night to accommodate everyone.  For Christmas dinner I decided to make all of our holiday favorites gluten free and refused to cook two meals.  We had stuffed peppers, Sicilian rice balls, brussels sprouts with roasted pine nuts and red peppers and a tossed garden salad.  For St. Nick we left out gluten free oatmeal chocolate chip & walnut cookies  and oatmeal raisin cookies. 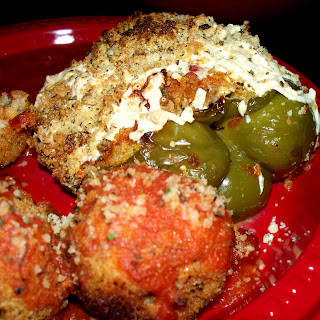 I stuffed the peppers with roasted chick peas, cashews, brown rice couscous and a pepper and small onion that were diced and sauteed in olive oil.  I topped the stuffed peppers with mozzarella style daiya and an Italian topping made from Almond meal, lemon juice, oregano, S&P, garlic powder and onion powder.  I tossed the chick peas in olive oil and smoked paprika before roasting them for about 40mins at 400 degrees.  Roasted Chickpeas are good enough to eat by themselves.  If you haven't tried them yet you should get to it! 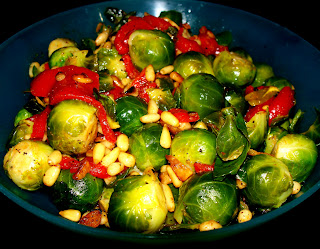 Brussels Sprouts with pine nuts and red peppers is one of my all time favorite dishes to make.  I like mine extra garlicky.  First I blanch two pounds of brussels sprouts for about 5 mins. I drain and set them aside.   I saute about 5 cloves of garlic thinly sliced in some olive oil just until they start to turn golden brown.  I throw in about a cup of pine nuts  and saute for another minute or two.  I add about a cup of thinly sliced red peppers and cook for another two minutes.  I add a bit of lemon juice (about 1/3 of a cup) then add the blanched brussels sprouts and freshly ground sea salt and pepper and cook for a little bit more.  You can transfer everything to a baking dish and roast for a bit in the oven until the brussels sprouts are crispy, but I don't.  I serve it right from the pan. Crusty bread is the next task for me to tackle.  The grocery stores around here carry packaged gluten free breads but they all suck.  I serve the Brussels sprouts with brown rice and brown rice couscous, but it pairs really well with a good bread.  If you have any tips for making an excellent  vegan and gluten free multigrain loaf of bread please, please. please pass it on.  I'm desperate! 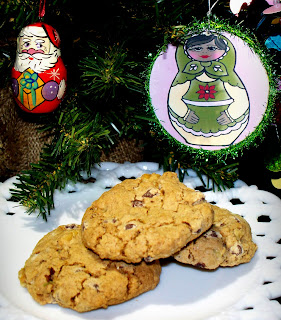 Nobody seemed to notice the lack of wheat in their Christmas dinner.  St. Nick definitely didn't pass up the cookies our youngest left out for him.  I think my days of cooking duel meals are numbered.
For the new year I'll have to figure out how to make a vegan and gluten free buffalo wing.
Posted by Mrs.TattooedGeek at 2:22 PM 2 comments:

A few of our original candle labels recently got a makeover. 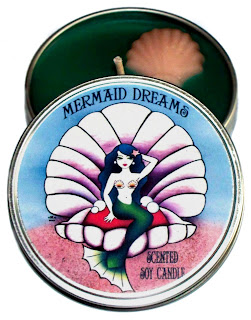 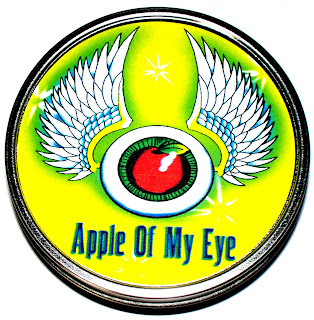 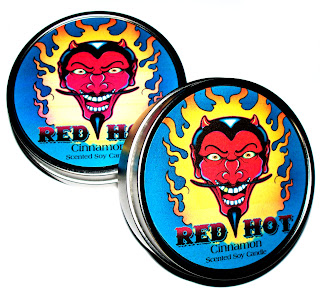 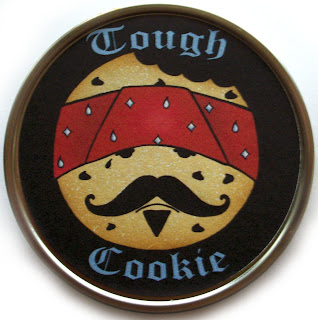 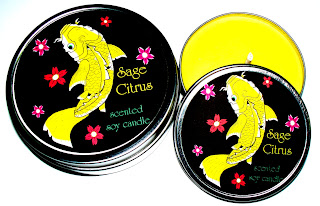 I'm really happy with the new labels, especially Red Hot.  Hope you like them too!  All of the made over candles are available in both shops http://www.tattooedgeek.etsy.com/ and http://www.tattooedgeek.etsy.com/.  I'll be adding a Red Hot lip balm this week.  An Apple Of My Eye and Tough Cookie lip balm will be added soon too.  Sachets are also in the Etsy shop now, they'll be up on the website sometime this week. 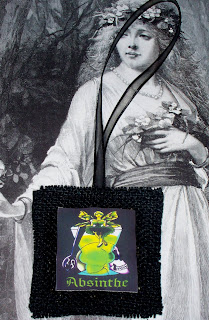 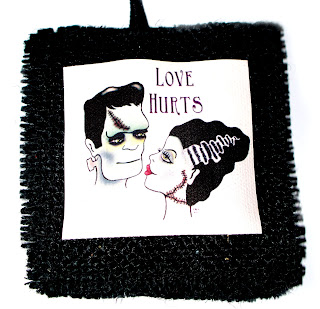 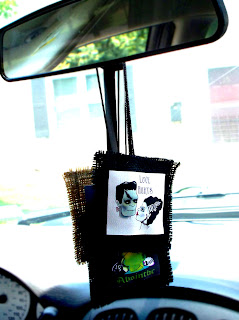 The sachets are great in the car, or the office, they're great anywhere the air could use some scenting.  Hope you are enjoying the summer.
Posted by Mrs.TattooedGeek at 7:57 PM 2 comments:

I am really happy to announce that we are back on Etsy.  I really underestimated how much I'd miss having my own little corner of Etsy, how much I'd miss convo's and hearts and all the other good stuff Etsy has to offer.

I won't be using the Mrs. Tattooedgeek shop though.  I've decided to neaten things up a bit for branding purposes.  From now on  you can find us at http://www.tattooedgeek.etsy.com/.   I've got the new Etsy shop stocked up with candles, lip balms and solid fragrance balms.  I'll be added extra large pocket mirrors in the next day or so, and 1inch pin sets.  I've also added a few new products, like the Little Red Candle and the Dill Pickle lip balm seen below.
I'm still keeping the website active, for those without an Etsy account.  http://www.tattooedgeek.com/ In the future I may add a few exclusives to both of the shops, but for now you can get the same products in either shop.
﻿
Posted by Mrs.TattooedGeek at 1:29 PM 1 comment: 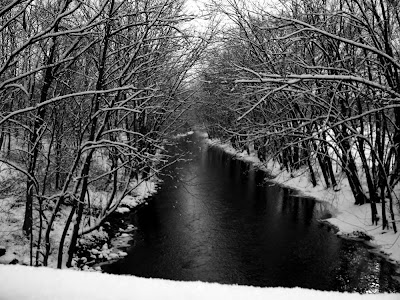 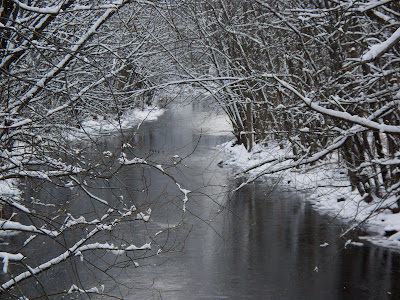 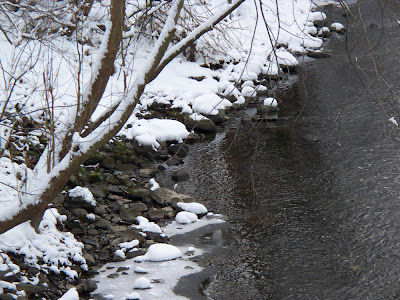 We had our second snow storm of the season yesterday.  The kids had the day off from school.  Fridays and Mondays are always the best days for a snow day, don't you think.  I was able to finish up some label art for one of this years Valentines Day candles.  I can't wait to share this one. I expect to have pictures here early this week and the candles in the shop by mid week.  I'll also be added extra large pocket mirrors to the shop this week.
Posted by Mrs.TattooedGeek at 9:47 PM 5 comments: 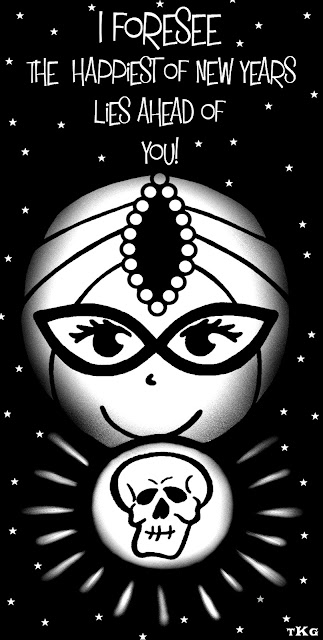 Happy 2011 Everybody!
If you ask me the best thing about 2010 is that it came on quick and left ever quicker! Well there's that and the fact that  Melisser Elliott included me and Tattooed Geek in her super awesome book The Vegan Girl's Guide To Life.  Ooh, and that the powers that be  at The Style Network brought us the hot mess that is Jerseylicious.
Now on to Christmas.  The best Christmas present was delivered on December 23, Mike had his follow up body scan and was given a clean bill of health - he's completely cancer free!  We expected as much but it was still great to hear.  We kept Christmas very low key this year, but we did try a few new recipes that I wanted to share. 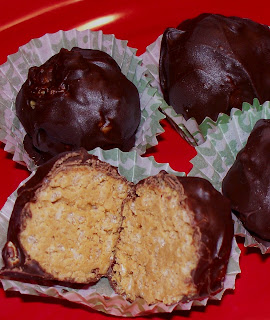 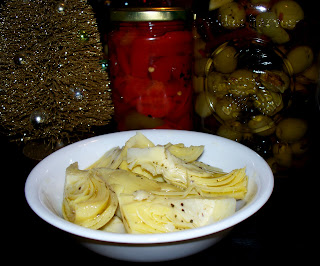 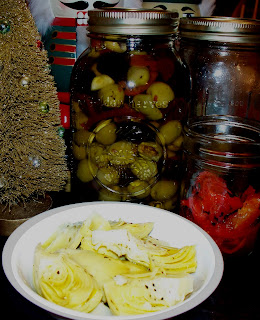 Nanny (my mother in law) came for Christmas baring jars and jars of fresh marinated artichokes, roasted red peppers, olives, sun dried tomatoes with garlic and a ton of Eggplant Caponata (sometimes called Eggplant appetizer). Eggplant Caponata is a thick Italian eggplant stew/spread. It's naturally vegan and is perfect served at room temperature with lots of crusty bread.  My kids go wild for it.  You can find it canned or jarred in the Italian sections of most grocery stores.  However it's much cheaper to make your own.  Caponata is the perfect addition to  Antipasto platters (especially vegan ones.)
Eggplant Caponata﻿
(recipe originally found in Fresh From The Vegetarian Slow Cooker by Robin Robertson)
2 tablespoons olive oil
1 medium-sized yellow onion, chopped
1 celery rib, minced
1 large eggplant, peeled and diced
1 medium-sized red or green bell pepper, seeded and chopped
1 tablespoon tomato paste
2 tablespoons red wine vinegar
1 tablespoon sugar
1/2 teaspoon dried basil
1/4 teaspoon dried oregano
1/4 teaspoon red pepper flakes, or to taste
Salt and freshly ground black pepper to taste
1/3 cup black olives, drained pitted and sliced
1 tablespoon capers, drained and chopped
1 tablespoon minced fresh parsley leaves
1.  Heat the oil in a large skillet over medium heat.   Add the onion and celery, cover, and cook until softened.Add the eggplant, cover and cook, stirring occasionally, until the eggplant begins to soften, about 5 more minutes.
2. Transfer the mixture to a 4-quart slow cooker. Add the bell pepper, garlic, tomatoes, tomato paste, vinegar, sugar, basil, oregano and red pepper flakes.  season with salt and pepper. cover and cook on low until the vegetables are soft but still hold some shape. (in the slow cooker about 6 hours.)
3. When the vegetables are cooked, stir in the olives, capers and parsley.  Taste, adjust seasonings. Transfer the caponata to a bowl and let cool.  Serve at room temperature. If not serving right away cover and refrigerate until needed.
I've made this recipe without a slow cooker. I cooked it all in one large pot, instead of transferring the sauteed onion, celery and eggplant to a slow cooker just lower the temperature to medium and continue the recipe as listed.  Stir often.  Caponata is much better the next day. I recommend always preparing it a  day in advance 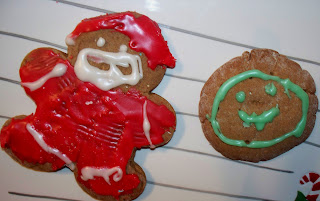 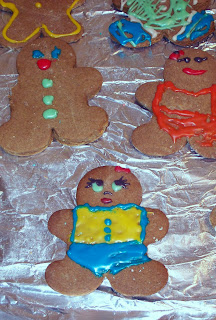 Nanny also very graciously occupied the kids with gingerbread baking and decorating while Mike and I slipped away for some last minute Christmas shopping. 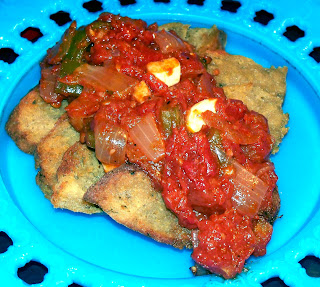 Mike planned Christmas dinner Cajun style. He made a vegan jambalaya, gumbo and (my favorite) Cajun Seitan.  As it turns out I'm not a gumbo person, and maybe not a jambalaya person either. I am definitely a Cajun seitan person though. 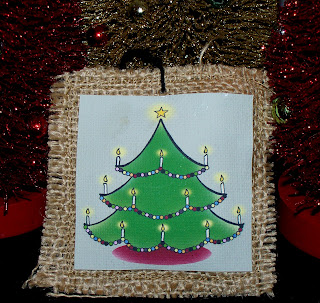 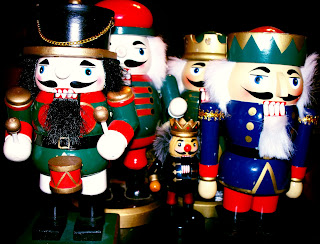 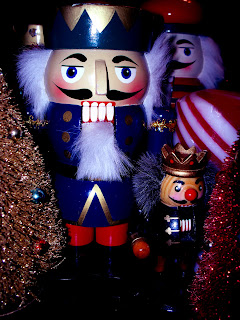 All of our Christmas decorations are getting packed up as I type. Usually it makes me sad to stuff our wooden soldiers into their plastic sarcophagus  for another year.  Not so much this time though.  Maybe I'm still in a food induced stupor, but this time I'm glad to be packing in all the holiday hoopla.  I'd rather focus on the new year ahead of us. 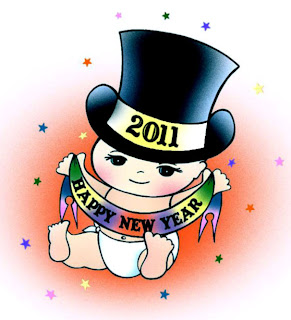 You can usually find me lurking somewhere around here:

Some of my favorites:

Find us on Etsy too! 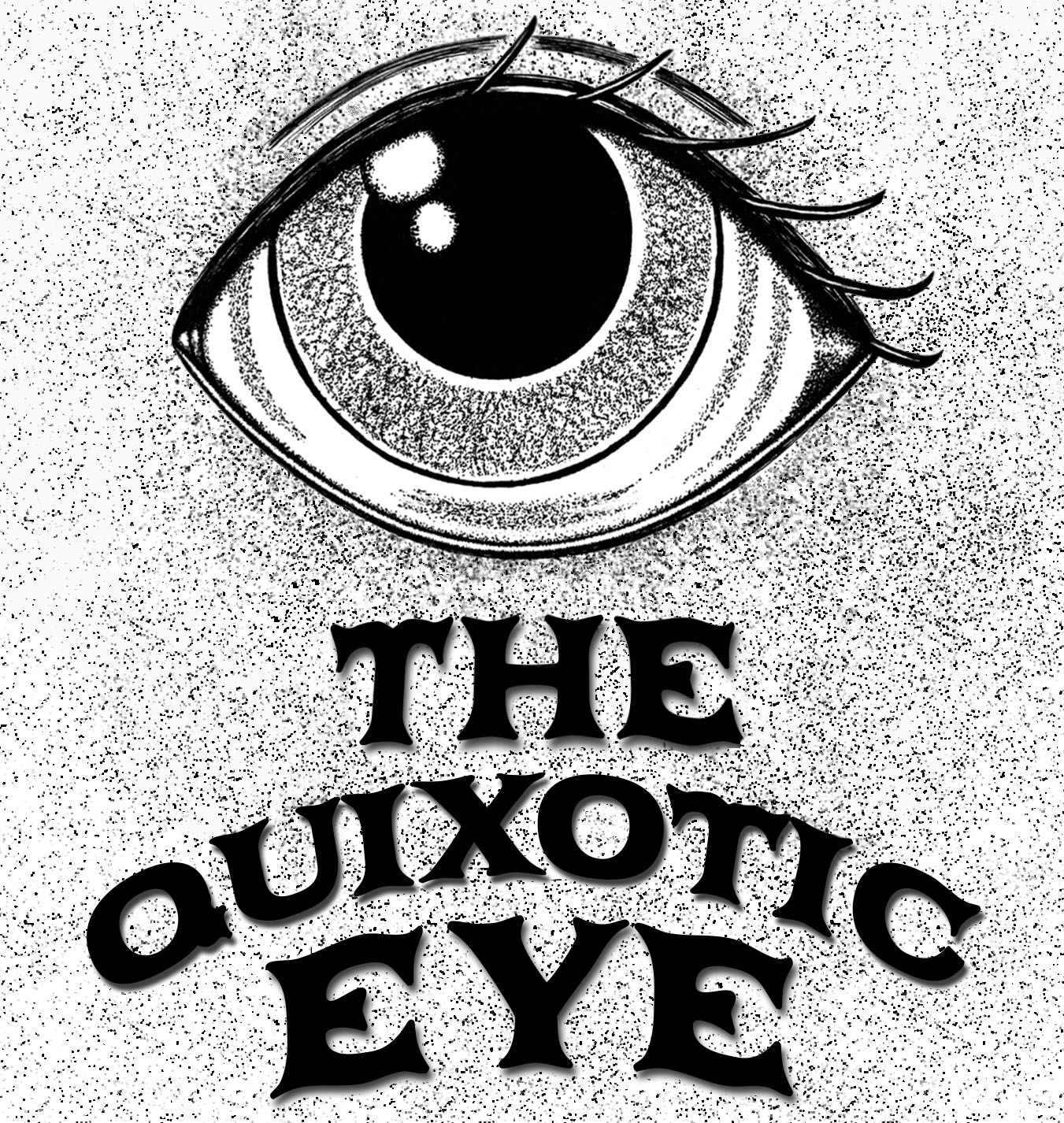 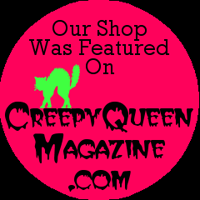 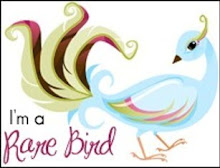 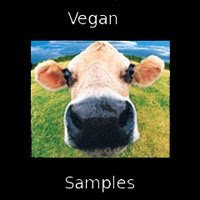 All profits from the sales of vegan sample bags goes directly to the animals. Go get your bag today!